"This Is My New Family"

Today I realized I’d been on the road for 9 months since I quit my job and left home last August.

I had traveled all around the world – befriended hundreds and chatted with thousands. Dove the Great Barrier Reef. Bought a motorcycle and started a biker gang in Vietnam. Wined and dined that beautiful Italian girl in Venice. Lived with nomads herding sheep on horseback in Mongolia.

Every experience has opened my eyes to the world – however one stood out. Earlier this year, I spent 6 weeks volunteering at an orphanage in Beijing and it has altered the entire course and purpose of my travels.

New Hope Foster Home is an orphanage in Beijing for kids with special medical needs – they provide care and medical treatment for babies with surgically correctable deformities. Dr. Joyce Hill and her husband Robin opened New Hope in 2002 after adopting a special-needs little girl and started taking in babies from local Chinese orphanages. Today with 6 facilities in Beijing and the Henan province, New Hope cares for over 300 children – all fully funded by donations by friends and sponsors.

I first heard about New Hope a couple years ago when a good family friend from our church read about the story of New Hope in “The House of Hope” by Elisabeth Gifford and went over to volunteer for several months. Since then, several members of our church have volunteered at New Hope caring for the kids in Beijing and bringing them to Hong Kong for surgery. Even with a deep sense of admiration for the people who were sacrificing their time for these kids, I was still indifferent and unwilling to take time off work and visit or volunteer. With the limited vacation time I had each year, I selfishly prioritized music festivals and getting drunk at popular vacation resorts. Why would I go spend it in China? I’m in my 20’s – I’m supposed to go get my brain fried at Coachella and blow all my money in Vegas.

When I left home to travel, Papa Chen suggested I include New Hope in my destinations to give my trip more purpose and in hopes I would learn a thing or two. After three months in central and eastern Europe, I had accomplished my original purpose of going outside my comfort zone, traveling alone to places I’d never heard of, and meeting people from all over the world. But I wasn’t satisfied, I wanted something different and to accomplish more with this trip. Every modern city mirrored the next, but with different people, different languages, and possibly cheaper beer. Everyone works the 9-5, watches Netflix in bed, shops at H&M, and blows their money on useless crap on the weekend. I needed to experience something different that would make me think more – something to push me even further out my comfort zone to think beyond the norm. With that, I contacted New Hope and arranged a month to be a long term volunteer.

My plane arrived to Beijing at 1AM – I spent the night at the airport before I could get picked up at 6AM. It was freezing cold having just spent a month in the Australian summer. The driver, Xiao Li, showed up right on time – 6AM in front of the Terminal 2 Starbucks. Xiao Li is a tall Beijing local with the typical thick Beijing Chinese accent and ridiculous rate of words that come out of his mouth. After chatting with him in the car, I found out he has been working as a driver running errands for New Hope for 15 years. With two kids of his own to support in college, it’s obvious he loves his job and really believes in the purpose Robert and Joyce Hill have for New Hope helping kids.

The orphanage is an hour drive out on the outskirts of Beijing located in a poor little village called GuoJiaWu (郭家务) where most of the residents seem to be farmers. Cookie cutter trees are planted everywhere, I later find out it’s part of Beijing’s efforts to plant and transport trees into the city to address their ongoing smog issue.

We arrive at New Hope at 7AM, I am greeted by Rebecca – my main point of contact who has been arranging everything for me. Rebecca lives with her husband Mikey and their 1 year old son JonJon in an apartment on the property. The two of them had actually met at another New Hope location and gotten married a couple years back – kind of goes to show the level of commitment everyone has here.

I was nervous when I met the kids. I’d be lying if I said I wasn’t initially put off by the physical appearance of a couple of them. While some seemed completely normal, others had obvious physical deformities. Ranging from ages 1 to around 5, every single child has some sort of medical condition such as congenital heart disease, cleft lip, spina bifida, club foot, imperforate anus, missing parts/limbs…etc. However after getting to know each kid by talking or playing, I stopped noticing their deformities. Kids where I initially noted peculiar facial features seemed normal. It’s similar to when you judge a stranger over an obvious physical quality which then becomes irrelevant after you get to know them as a person – it’s simply a part of who they are. While I used to fear fathering and caring for a disabled child, I understand parents with disabled children now – they simply stop noticing or caring after day one. 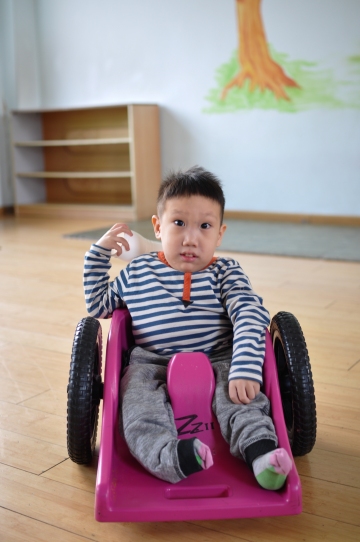 The kids don’t understand that they have medical conditions. One day in class, we were explaining that difference between a boy and girl – ShiChun is a girl and MaoMao is a boy. MingMing pipes up – “I can’t walk!”, excited to make a contribution to the class discussion. It was with this odd comment I realized MingMing doesn’t understand he has a disability, he accepts it just like how he accepts he is a boy. None of the kids are old enough to start questioning their disabilities and situations.

Every four kids share a nanny they call mama. There is a morning, afternoon, and night nanny – the kids basically have 3 mamas each 8 hours at a time. The nannies are local women from the village who play the role of their mothers, caring, cleaning, bathing.. etc. I was told there used to be two kids to a nanny but was increased due to budget cuts. At this location, there is a total of 50 kids, 20 staff…. and a total of 2 men. Other than myself, the two other men consists of Rebecca’s husband and Robert the owner of New Hope – neither of which interact with the kids on a regular basis.

“The kids will love the male influence of an older brother, we’ve never had any male long term volunteers” Rebecca excitedly pointed out.

Sadness instantly loomed over me. These kids have next to no male influence – they have absolutely zero concept of having a relationship with a father or older brother. People automatically associate the care of children as a woman’s job but what really surprised me is how men who want to help others hadn’t thought of and come to this orphanage. When telling my parents, my dad pointed out I would be able to make a huge impression on these kids – I could really make a difference to them. 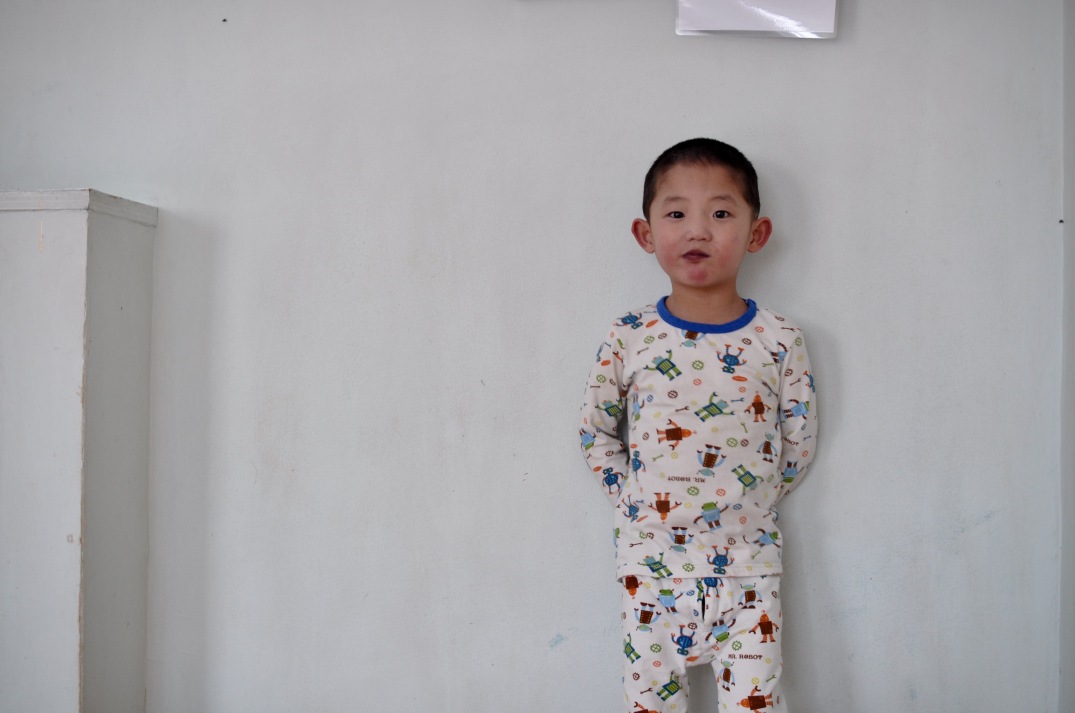 At 9 years old, Shao Dong is by far the oldest kid at this location and therefore requires one-on-one tutoring. Suffering from an imperforate anus and severe ADD, it was a constant battle and increasingly frustrating teaching him simple things like the numbers after 10 or translating the most simple english sentences. I nearly tore my hair out after we worked on “I read at my desk” for three days straight. Every time he spots me during the day he would countlessly ask if we were going to have class – something which grew increasingly frustrating. 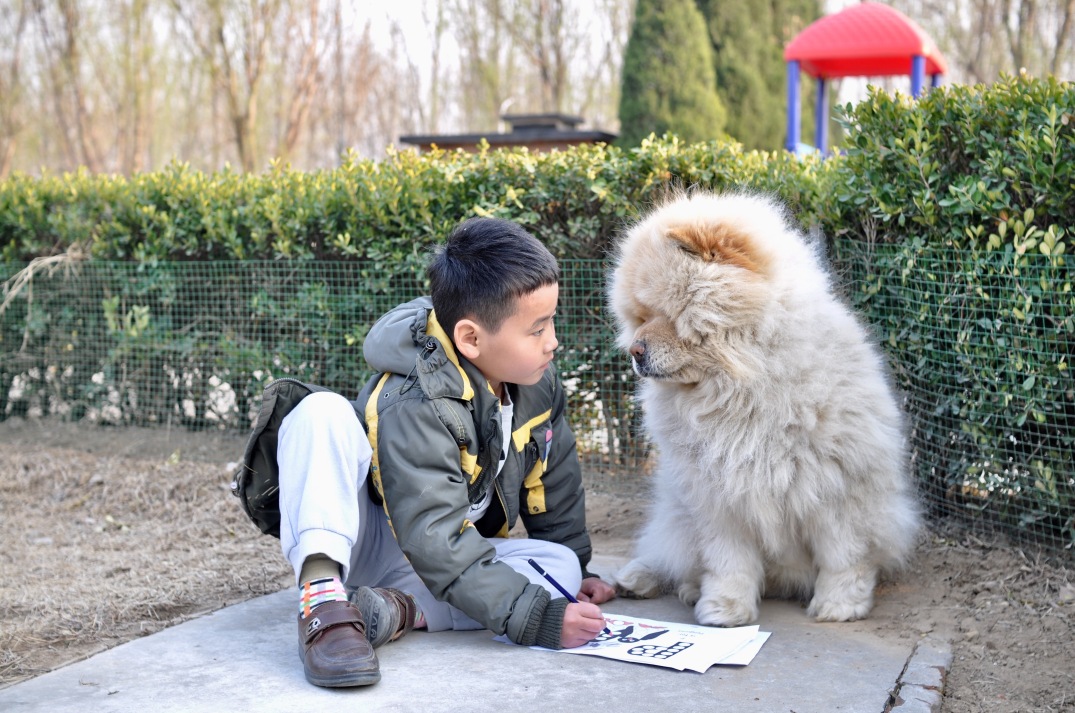 It wasn’t until one day Rebecca provided some insight and background on Shao Dong’s life. He was 6 when he arrived at New Hope still in diapers and acting like a baby having been previously neglected. Due to his previous trauma and how he’s been surrounded with 5 year olds, Rebecca told me we should treat and set expectations accordingly. Shao Dong had actually been adopted at age 7 and taken by his new parents only to returned a day later after they found out about his medical condition. Guilt washed over me as I realized the reason for Shao Dong’s constant need to ask for reassurance and having been so annoyed at him for it. I had such high expectations for him but never compared his childhood to mine. Here’s me as a kid bitter at my Dad for forcing me into extracurricular math, english, violin, piano, and tennis when Shao Dong didn’t even know what it meant to have a male figure. With this new insight, I grew more patient and understanding of his needs. I became more of an older brother to him than a teacher – I could see the male attention was what he actually really craved. Instead of sitting him down and cramming math down his throat, we would learn to throw a ball outside while I snuck a little bit of math in here and there.

I started missing my parents more. I started calling them more regularly every chance during break. I would tell them about the kids and share my thoughts. Within a couple weeks our relationship improved drastically. I would get annoyed if they didn’t immediately pick up my facetime calls whereas I would previously ignore emails from my Mom for days on end. I asked my Mom to come visit me at New Hope and my Dad to come hike Mt Everest base camp with me.

Things I used to worry about back at home became less important. People obsessing over materialistic possessions became foolish. All the status symbols we buy to compete with each other in our first world country became one huge pissing contest. It was easy turning a blind eye to strangers struggling halfway around the world in light of my personal desires. It’s difficult befriending them then turning back to your materialistic dreams. That Aston Martin I was previously prepared to blow six figures on quickly became a joke.

My previous travel destinations comprised mainly of first world countries and vacation destinations – places where tourists arrive in fancy tour busses to buy Gucci bags and take selfies while on vacation. I realized I had basically been traveling to experience different ways to enjoy life.

After China I had originally planned on going back to Southeast Asia and traveling with a girl I really connected with. That changed when I realized this experience was making me think so much. I now craved a different kind of experience. I decided I wanted to experience places where people couldn’t afford to worry about the perfect selfie or the newest iPhone. I wanted to see what these people actually valued and what made them happy. I wanted to live with them and experience their daily lives.

On my last day at New Hope after 6 weeks, I said a tearful goodbye to the kids and headed to the bus station. Instead of a direct flight, I opted for the 40 hour bus and train to Mongolia. There, I would go on to experience the simplistic lifestyle of nomads, live with people who have next to nothing, and go through the same struggles they face every day.